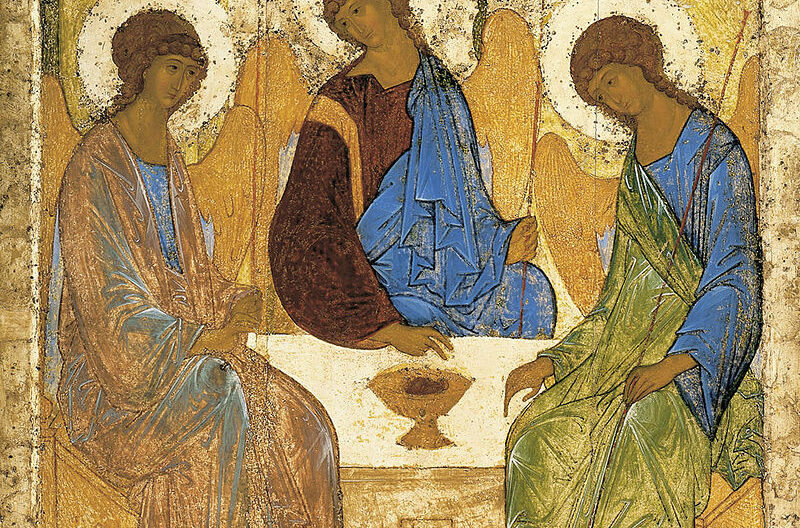 In the Bible, God speaks and deals with people many times. In all cases, He speaks and acts from His Name in the singular. But there are several cases in the Bible when God speaks of Himself in the plural. At the most important moments in history, decisions are made and announced as a result of the Council of Persons of the Holy Trinity.

The First Council. At the creation of Adam: “And God (Elohim) said, Let us make (we make, first person plural) man in our image, after our likeness: and let them have dominion over the fish of the sea, and over the fowl of the air, and over the cattle, and over all the earth, and over every creeping thing that creepeth upon the earth” ( Genesis 1:26).
The Second Council. At the creation of Eve: “And the LORD God (Yahweh Elohim) said, It is not good that the man should be alone; I will make him an help meet for him” (Gen. 2:18). In Hebrew Masoretic text there is אֶֽעֱשֶׂהּ “I will make” first person singular, but in Septuagint there is ποιήσωμεν “we will make” or “let us make” first person plural.
The Third Council. During the expulsion of people from Paradise: “And the LORD God (Yahweh Elohim) said, Behold, the man is become as one of us, to know good and evil: and now, lest he put forth his hand, and take also of the tree of life, and eat, and live for ever“(Gen. 3:22).
The Fourth Council. When the tower of Babel was dispersed: “And the LORD (Yahweh) said, Behold, the people is one, and they have all one language; and this they begin to do: and now nothing will be restrained from them, which they have imagined to do. Go to, let us go (we go, first person plural) down, and there confound (we confound, first person plural) their language, that they may not understand one another’s speech” (Gen. 11: 6-7).

In these cases, God speaks directly from Himself in the plural. But there are two more cases about which God informs people through the prophets that decisions are made by Him not just as “I”, but as a Council of several “I”.
The Fifth Council. Here is a mention of the Great Council, at which God sends his Son for the first time as the Messiah into the world. David prophesies: “The LORD said unto my Lord, Sit thou at my right hand, until I make thine enemies thy footstool” (Psa.110:1). And here Isaiah: “Declaring the end from the beginning, and from ancient times the things that are not yet done, saying, My counsel shall stand, and I will do all my pleasure. Calling a ravenous bird from the east, the man that executeth my counsel from a far country: yea, I have spoken it, I will also bring it to pass; I have purposed it, I will also do it“(Isa.46: 10,11); and “That say, Let him make speed, and hasten his work, that we may see it: and let the counsel of the Holy One of Israel draw nigh and come, that we may know it!”  (Isa 5:19).
The Sixth Council. John tells (or even hints) in the Apocalypse about the Great Eternal Council, which was gathered even before the Creation of the world, at which a decision was made about the beginning of Creation and at which it was decided that in order to save this creation, one of the members of the Council would have to suffer: “the Lamb slain from the foundation of the world” (Rev.13: 8).

On two occasions, humanity also participated in the Great Councils of Elohim. So Adam, personalizing all mankind, could and participated in the Second Council for the Creation of a Woman. Likewise, Virgin Mary, as a representative of all humankind, which had already matured to accept the Savior, participated in the Fifth Great Messianic Council, having agreed to become the mother of Christ.

In the Bible, Christ mentions one more, the Seventh Great Council of Elohim, which has not yet taken place, but will take place in the future, at which a decision will be made about the Second Coming of Christ into the world, the Last judgment of this world and the construction of a New world: “But of that day and hour knoweth no man, no, not the angels of heaven, but my Father only” (Mat.24:36). That is, there will come a time for the Last Council to gather, at which the Father will say to the Son to go for the second time into the world.

In total, we have the seven (the number of completeness) Great Councils of Elohim:
1. Pre-eternal Council about the Creation of the world and the suffering of the Son of God.
2. Council on the creation of man.
3. Council (with human participation) for the creation of women.
4. Council for the expulsion of the people from Paradise.
5. Council for the dispersal the tower of Babel.
6. Council (with human participation) on the First coming of the Messiah into the world.
7. Council (to be held in the future) on the Second coming of the Messiah into the world.