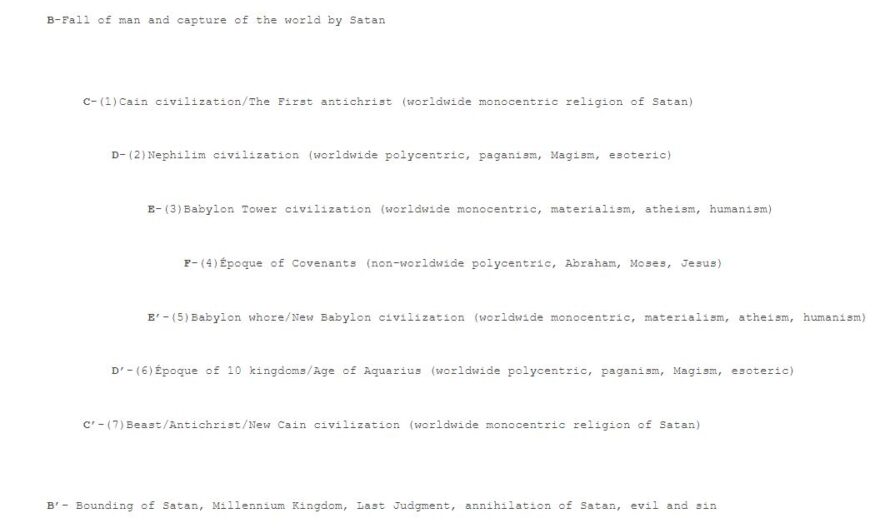 In the Bible the history is divided into some eras, each of them has its own characteristic features, so that these epochs and their sequence cannot be confused.

After the Creation, human history begins with the Fall of man, when Satan gained power over the world, and ends with the end of this world, when this rotten world will be destroyed, Satan and his companions will be thrown into the lake of fire and Jesus will create New haven and New earth. Between these watersheds of the divine history, there is a sequence of seven eras of, properly speaking, the history of the sinful humankind. The essence of this human history is struggle between God and devil for the people souls.


1 era. This is the époque of of Cain. He was the first “Antichrist”, the first Satanist and conscious fighter against God. Cain created his own global satanic religious civilization. The essence of this religion is the turned inside out religion of God. This is the first era of the devil’s power in the World.

2 era. This is the Antediluvian era or the so called the era of Nephilim. It arose as a result of the degeneration of the Cain civilization, which deprived of the help of God and fell into decay. Women in such degenerate cultures always gain power. And so it happened – women took power and began to mix with angels. Angels seduced people with technology and esoteric and pushed people to worship them as gods. This is how polytheism and occultism arose. The Cain religion was terrible, but also great, for its imitation of the religion of Yahweh. The civilization of the Nephilim is pathetic. Many pitiful gods who indulge in debauchery and fuss like rats (read the myths of Ancient Greece).

3 era. This is the postdiluvian era of the Babylonian tower. These people were indifferent to religion; have become atheists, humanists and materialists. They decided to build their universal proto-digital civilization with the help of bricks and tar, “0” and “1”.

4 era. After the scatter of the Babylonian pandemonium, the central “age of the covenants” begins. There were three covenants with Abraham, Moshe and Jesus. Chronologically this covenant era begins with the calling of Abraham and ends with the start of the New Babylon globalization and humanism (Renaissance époque). In that time, people started to heal Satan who was mortally wounded by Jesus. And the scroll of history begins to roll back.

5 era. New Babylon (Babylonian harlot in the Apocalypse) is an analogue of the Babylonian tower. Its main characteristics are: global character, indifference to religion, materialism, digitalization and the power of money. We are now living at the end of the heyday and in the beginning of destruction of this Babylon. Now it is Babylon, and not something else, because todays values are money, materialism and for the first time since the time from the Babylon tower – a global civilization.

6 era. New “antediluvian” era is a period of preparing to the global kingdom of Beast and Antichrist. During this era, after the global civilization of Babylon the Great will be destroyed (current crisis is the start of its destruction), the world will be preparing to accept the Antichrist. “And the ten horns which thou sawest upon the beast, these shall hate the whore, and shall make her desolate and naked, and shall eat her flesh, and burn her with fire. For God hath put in their hearts to fulfil his will, and to agree, and give their kingdom unto the beast, until the words of God shall be fulfilled” (Rev. 17:16-17). The distinctive features of this era are: revival of religious, esotericism, occultism, transpersonalizm, genetic engineering (the new Nephilim). This era precedes the Last Times.

7 era. The era of the new Cain or Antichrist, who will imitate Christ in everything, and the whole world will worship him (Rev. 13). This is the last era of the devil’s power in the World.

B-Fall of man and capture of the world by Satan

This macro-chiastic model clearly presents the whole schema of the Biblical history and shows its measures, main cense and laws of development. Later we will research each of these eras in detail.